I haven't worked much these last two weeks but that changes today.  It's going to be a little hard to get back into the swing of things but I'll manage :).  Our internet has been out so I have quite a few things to report today.

We finally finished all of our Christmases.  Squeak had a blast and was perfectly behaved as usual.  He got a bunch more stuff for us to find room for ;).

I haven't had as much time to sew as I would have liked considering that I've had so much time off, but I did manage to put together and quilt my How Far Will You Go Quilt.  I have to admit that I kind of gave up on this one about halfway through the quilting process.  For some reason I cannot sew a straight line with my walking foot.  I'm not sure what my problem is but I'm thinking that in the future I may just use my regular one and see what happens.  So not only is the quilting terrible, but the back has some puckering.  Nothing major, but definitely noticeable if your really looking.  What do you do with a quilt when it has flaws?  It's not done in colors that will match my house but I cannot bear to give it away after spending so much time on it (and I do love the top).  Is it okay to sell a not so perfect quilt?  Does it add character or just make it look like bad quality?  I also did a pretty good job of confusing myself on it.  I cut the inner border in advance and set it aside to make sure I'd have enough of that fabric but when I got to that part (about a month later) I thought I had cut the binding so I skipped the inner border.  Not a big deal, I'm happy with the way it looks, BUT when I went to do my binding I had a bunch of 1.5" strips instead of 2.5".  I'm pretty sure that JoAnn's doesn't have any more of that fabric and I can't find it online so I'm not sure what I'm going to do at this point.  I can't do a scrappy binding because I used nearly every little scrap that I had trying to piece together a back big enough.  That was a fail.  I ended up wasting a lot of time and had to go to the store for more, which they thankfully had, anyway. 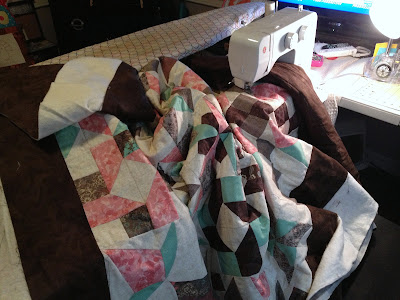 On to happier things--

I made another pair of Huggs for Baby T.  Her mother is being induced early Thursday morning so they are being sent with her sister.  Hope she likes them! 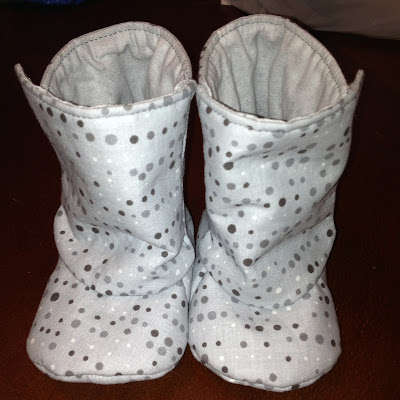 Since I was without the internet I wasn't able to print off the patterns for the projects I wanted to work on and wasn't able to get to the new Frosted Pumpkin pattern that I had saved to on it I decided it was a good time to FINALLY redo my sewing room the way that I really want.  I have rearranged the furniture in the past but not much else.  Since Dad is helping me to make some counters to line the wall with bookcases as the base for extra storage I figured I should probably paint BEFORE he installs them. 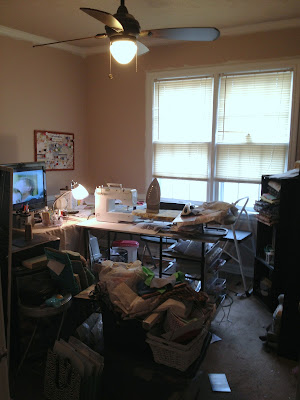 This is after moving everything away from the walls--SOOOOO much stuff!  Sad to say I actually purged two large boxes from it already.  And in an effort to clear out room in the overflowing closet (see below) I have put most of my large purses on sale in my Etsy shop. 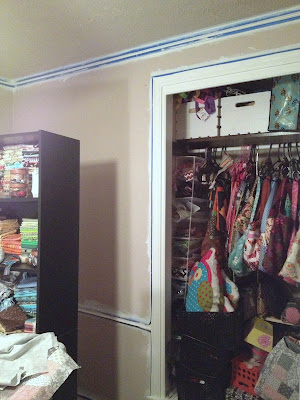 This room has trim and molding.  It took me about 6 hours to tape everything off after applying a fresh coat of white to the trim.  I read on Pinterest that if you paint over the painters tape with the color that it is covering, it will keep the other colors from bleeding under the tape and you will end up with a straight line.  Made sense to me so I figured I would give it a try.  We live in a rent house so I don't usually invest so much time into the painting but I want this room to be as close to perfect as possible.
One hint that the Pinterest site does not give is that you need to make sure your iron is off before you start moving furniture around (yes, you would think this was common sense but yet I still did it) or you may end up with something like this on your upper arm. 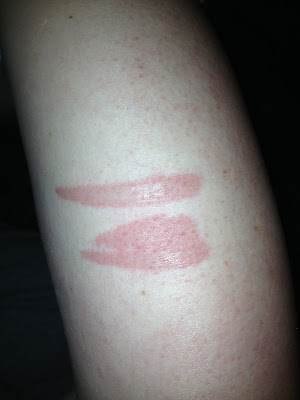 Just another shot of the before color of the wall.  I'm headed home after work to finish it up.  Can't wait to see how it looks when I'm done!!! 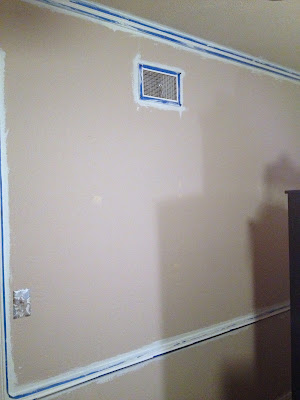 P.S.  Anyone know if it's okay to spray paint mini blinds?