Three of the quilts I made as Christmas presents.  The fourth, I didn't get to take a photo of before it was whisked away...

First up is my Dad's Pluses Lap Quilt.  I have always struggled to find masculine fabrics but thankfully I can always count on Parson Gray to help me out.  The quilt is Seven Wonders and the pillow is a combination of Seven Wonders and World Tour. 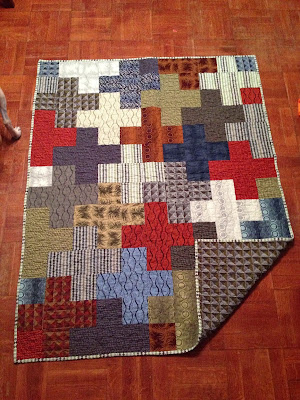 The weather was horrible when I was trying to photograph this finish so your stuck with an even worse than usual inside shot.  The photo of the pillow (which was actually a decent outside shot) seems to have disappeared.

Next was the baby quilt for my nephew.  I had originally wanted to make this for his baby shower but time got away from me so I made him a simple patchwork quilt instead.  So six months later I finally got around to giving it to him.  His entire room is Oklahoma themed and done in orange, blue and white so I wanted to match it as close as possible.  This quilt was also a great way to practice my free motion quilting and I have to say it has improved drastically over the last year!! 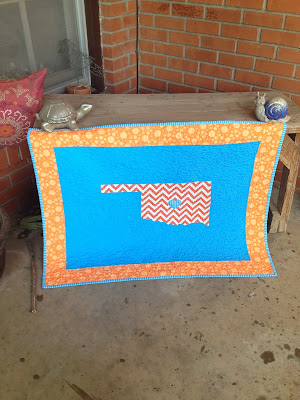 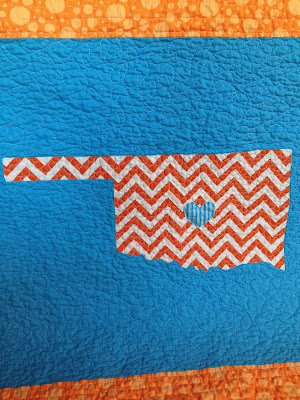 The third quilt was for my grandmother.  She was placed in a nursing home over the summer and has since had a stroke that has affected her short term memory.  She remembers me but not my kids.  After our Thanksgiving visit it was decided that she needed a quilt to brighten up her room.  I went home, took advantage of the Black Friday sales and came up with a simple patchwork quilt using three charm packs of Simply Color.  After deciding on the layout I had several charm squares left as well as some matching solids.  I decided to mail a 5" charm to each family and have them sign it and return it to me to be incorporated into the back of the quilt.  My hopes were that this would remind  her that even though we can't be there as often as we would like we are always thinking of her. 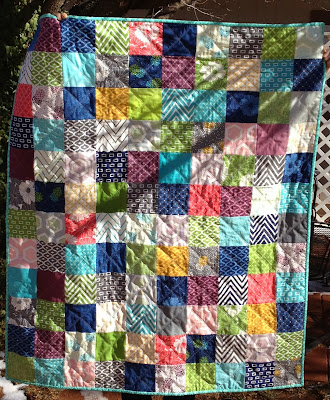 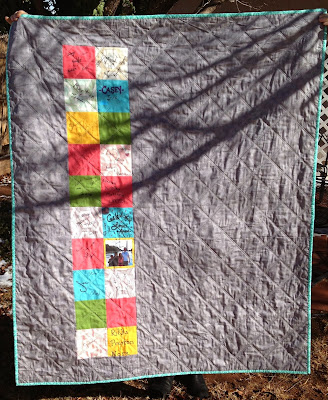 The fourth and final quilt was a simple patchwork baby quilt using the new Foxes Playground line.
Hubby has since asked for a quilt for his father.  It will be a combined Christmas/Birthday present that I hope to have ready by the January 12th.

Both of the LQSs are having their end of bolt sales today so I will be making a stop at each of them to stock up on background fabric (low volumes for a couple of quilts I have in mind, as well as white and gray).


That's enough from me for today.  Lots more to share though so check back next week :)!

Posted by Angela Bullard at 9:03 AM