A few things I've been working on since the middle of last week...be warned, there is a lot here!

First, and most important, is the block for the raffle quilt our local quild is working on.  We decided to use the colors from our guild logo and go for a scrappy effect.  I can't wait to see the finished quilt! 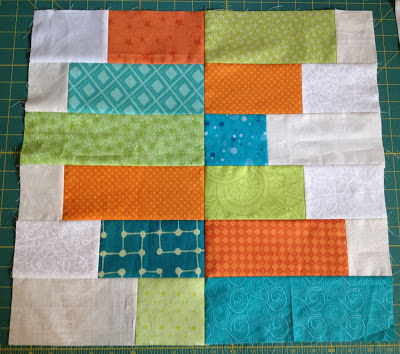 One of our guild members also designed a graphic showing support for those affected by the tornado.  It was too perfect not to make a paper pieced pattern out of.  A little bit of embroidery and it was done!  I'm thinking of adding a border or two and entering it into the mini challenge I read about last week (can't remember which blog it was, but it's one I follow so it will pop up before too long).  Another guild member and I agreed that these would make great pillows.  Simply add borders or enlarge the original pattern a bit... 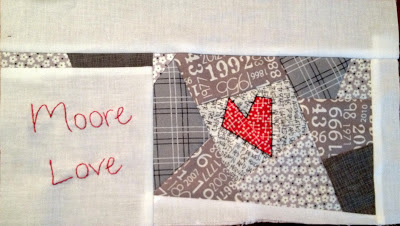 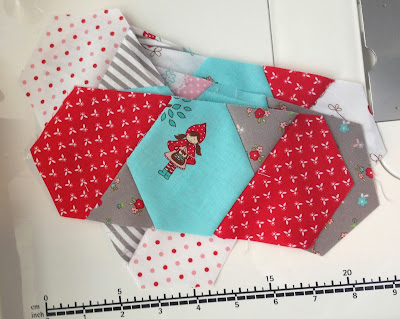 By Saturday I had six blocks completed and no more fabric to play with :(.  Hopefully they still have all of the prints in stock... 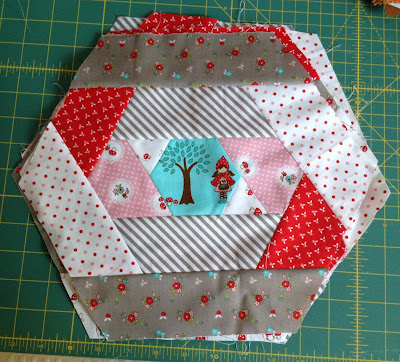 And since it's the last week of May I decided I should try to finish at least one more BOM.  Since I couldn't find my templates for And Sew On I was left with my Lucky Stars block.  The first attempt didn't go so well. 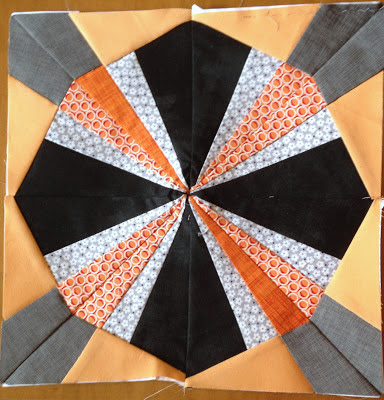 Not only did I use the wrong fabric on a couple of pieces (which I think I made work ok) but I sewed the sections together COMPLETELY wrong!  I originally said I wasn't going to fix it, but in the end... 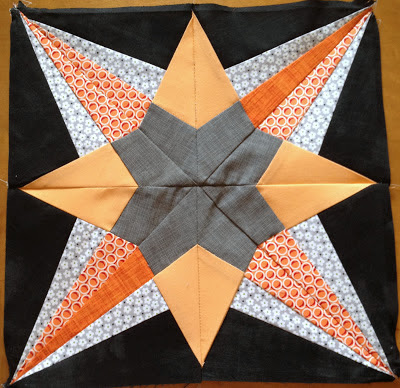 the perfectionist in me won.  Much better! 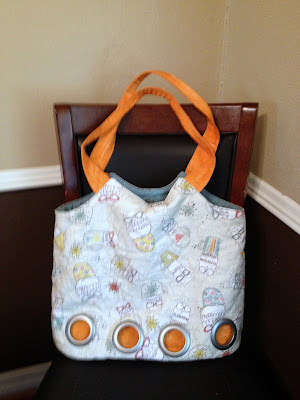 This project was started a couple of weeks ago and got put on hold.  It's another wonderful pattern by Sara at Sew Sweetness.  The grommets were a lot easier to work with than I thought they would be! 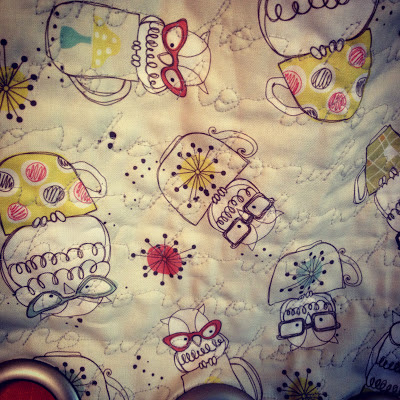 This project was the perfect opportunity to give free motion quilting a try.  I will admit that I wrote the words on there with a Frixon pen before attempting to quilt. 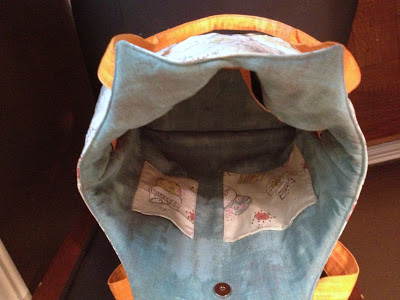 I'm afraid that's it for the sewing portion of today's post but I thought I'd go ahead and throw in a bit of random for you... 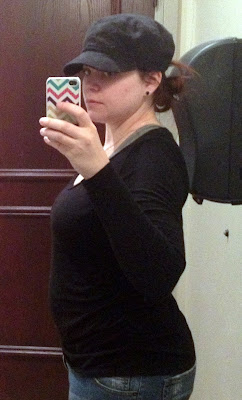 The first baby bump pic (and can't you tell I'm thrilled about it ?!).  I despise being pregnant.  I feel huge and disgusting...ok pity party over :P.  Would you like to know what I'm having? Well, this will be her first toy.  I saw it at Target this weekend and couldn't resist especially since I've decided to use a combination of Sarah Jane's lines Let's Play and Out to Sea.  I'm thinking Squeak may be due for a makeover on his portion of the room too so I will be picking up both lines in two different colorways.  So much work to do in five short months! 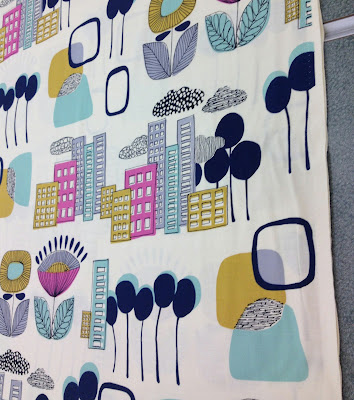 I found this fabric by Alexander Henry on sale at JoAnn's and had to have it.  I will be making myself a maxi dress next spring to celebrate getting my figure back (cross your fingers I can do it that quick!). 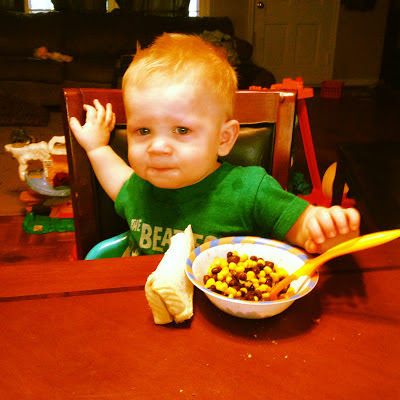 To help prepare Squeak for the arrival of Little Sis, we've made some big boy changes around the house.  He now uses a booster seat instead of a high chair (this pic was his first time sitting at the table).  The kitchen is now open to him as well (unless we're actually cooking).  And we have introduced the potty chair.  We don't actually expect him to use it yet but at least he can get used to it.  In the next week or two we will also be getting him a big boy bed so little sis can have his crib. 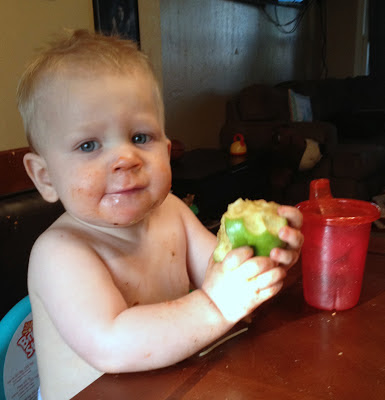 We have a standing date with my brother on Sunday nights.  He comes over and eats dinner with us and watches tv for a bit.  And to tell the truth, we usually all fall asleep on the couch around 9ish.  While we were busy cooking dinner Squeak picked up an apple and started chowing down.  I didn't even know he could eat it like that!  This little boy LOVES fruit and veggies!  Apples and raw red pepper seem to be some of his favorites, oh and bananas, gotta have bananas! 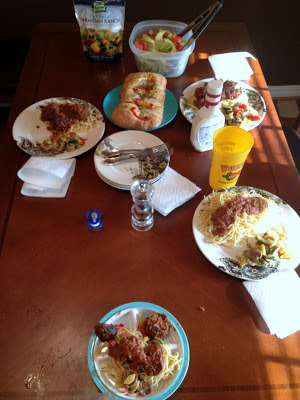 Just to prove it's possible, here's a shot of the dinner.  I won't share the recipes I used because they were just so-so.  I will be on the hunt for different ones in the future.

Linking up with Fabric Tuesday, BOMs Away Monday, Paper Piecing Party & Let's Get Acquainted.
Posted by Angela Bullard at 6:02 AM