There was very little sewing this weekend but I had a great time anyway!   Friday night I managed to whip up (that's an overstatement, the interior zippered pocket gave me a lot of trouble and took FOREVER) this cute little Thunder purse. 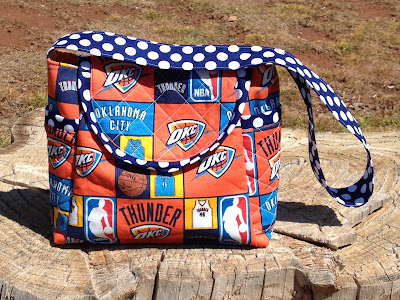 There are a few things I would do differently if I made another one.  But overall its not too bad!

We celebrated Easter with my husband's family.  There are a couple of little ones pretty close to Squeak's age so he had a good time.  We flew kites, looked at the cows, hunted Easter eggs, ate rocks... I managed to get some decent shots of my completed Orbit Quilt thanks to my two helpers :).  If we had waited about an hour the wind would have died down completely and made it a lot easier. 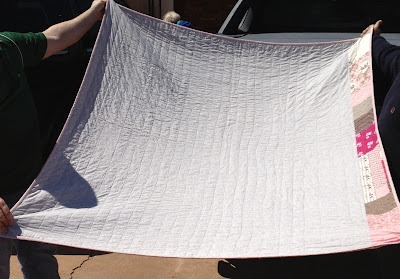 A quick shot of the back. 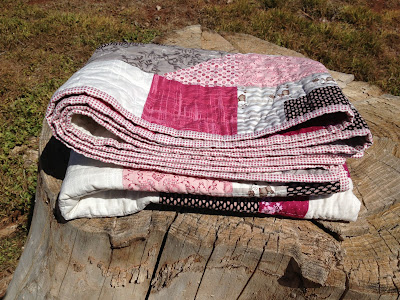 And folded up nice and pretty. 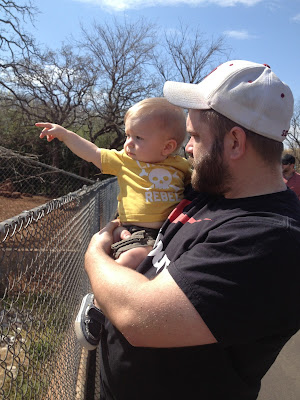 Squeak also took his first trip to the zoo.  The stroller didn't have the greatest view so Daddy held him up while he pointed at the giraffes and other animals.

AND he finally said his first words.  Was it Mommy or Daddy?  No.  It was "Thank you".  A different choice than most kids, but at least he's polite :)!

I don't know if I've ever talked about it before, but I am a book fanatic.  I haven't had much time to read lately but when I find a good book I can't put it down and I will read it multiple times.  My favorite genre is young adult fiction so you can imagine how excited I was to go so The Host this weekend.  I already suspected they were going to destroy it and I was right.  If a book has a good plot and storyline, why do they feel the need to change it when making the movie???  Instead of trying to build up the character relationships, they added a chase scene (not too much of a spoiler I hope!).  And the characters are lacking.  They have no depth.  Some are omitted altogether.  I may have to go read the book for the 8th time now just to try to get rid of the disappointment from the movie.  On a more positive note, I did see a trailer for the Mortal Instruments and it looks good!  Let's hope its movie lives up to the book!

Hope you have a great week!
Posted by Angela Bullard at 6:10 AM