I have to say that this weekend did not go well in my sewing world.  I attempted two diaper clutches in a new style and was very unhappy with my end results...guess my mother-in-law will be getting a couple of new items :).  The overall look of the clutches were very cute but I used an extra firm stabilizer and since they were so thin (about an 1" wide) it was hard to get them through my machine.  I may end up handstitching them but that could prove to be just as hard.  I'm sure I'll figure out something, lol.

After those botched attempts I did manage to knock out one new diaper bag.  I have made two of these for myself and love them.  My first one was made with the Meadow Friends fabrics by Moda and the second (the one I'm carrying now) can be seen in one of my earlier blogs was made using an owl fabric by Kanvas.  This newest bag is perfect for a new little addition to the family with a total of 8 pockets it is sure to keep all of your baby essentials organized. 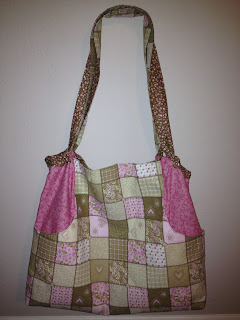 I also managed to get a few random keyring clutches ready and got caught up on all of my orders that I had been putting off.  I still have three pillowcases dresses, a carseat canopy, and some wee wee tee pees that need to go out by the end of the week.  Eek!

The most fun I had all weekend was introducing Kale to solid food. 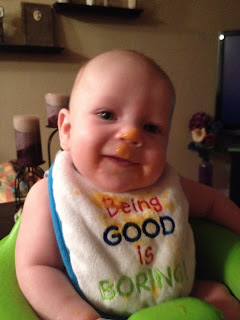 We made a huge mess but he seemed to like it and we had a blast!  We started off with squash and a couple of days later tried sweet potatoes.  He's still trying to figure out how to get the food off of the spoon but it won't be long before he has the hang of it!  The mother-in-law (Linda) is coming to watch him tonight so I get to focus on my sewing!

Posted by Angela Bullard at 6:24 AM