I'm trying to get started early on my Thunder gear this year.  I will admit that up until the end of last season I had not watched professional basketball in nearly 10 years.  I used to LOVE it!  I watched every game, college or professional, and enjoyed every minute.  My favorites were Charles Barkley and the Duke team with Battier and Langdon (that tells you how long ago it was).  But at my husband and cousin's insistence I decided to watch the last two series of the playoffs...now I'm hooked.  The reasons I stopped watching in the first place seemed to be missing from the Thunder team.  There was no showboating and they actually played like a TEAM.  In order to properly support my team this season I will need to get some Thunder attire.  But I do not want to have the same stuff as everyone else in Oklahoma City so I decided to make my own.  This is what I've come up with so far.  Keep in mind they are just the preliminary projects. 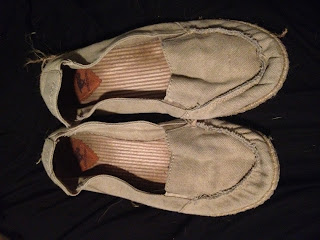 I started off with my poor beat up Rocketdogs.  These were my favorite shoes before I got pregnant an the only thing I've worn since-hence their condition.  I thought they would be the perfect trial pair since they are falling apart (the soles are in even worse shape).  I did wash them before getting started. 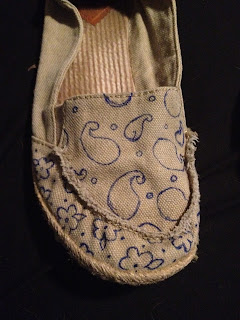 My next step was to draw out the pattern directly onto the shoe so I could get an idea of how it would look.  In hindsight, this was not the best idea.  The paint that I used did not cover the marker so I was not able to make any adjustments to the pattern after I started. 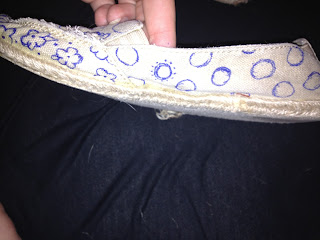 I wanted a variety of patterns and prints.  I girl that I went to high school with and am now friends with on Facebook has done some wonderful OU and OSU shoes in the past so I looked to her photos for inspiration. 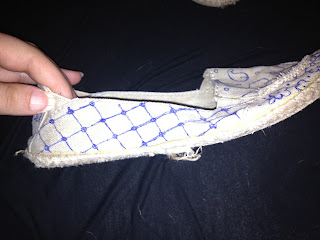 I toyed with the idea of putting the Thunder logo on the tops of the shoes but decided to go simple since it was my first time. 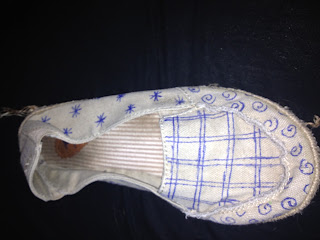 I also very sloppily wrote THUNDER on the backs of the shoes and was unable to cover it with the paint.  Hopefully the hems of my pants will cover my mistake. 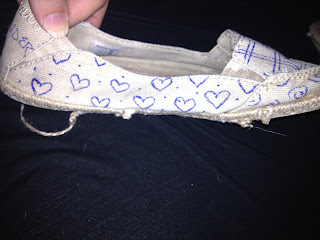 Next I sketched out a quick drawing so I could see where I wanted to put the different colors within each section. 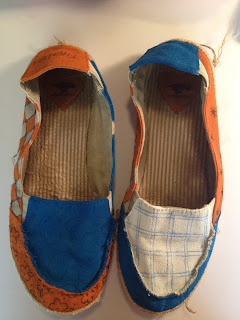 Finally time to start painting.  Again I learned a lot which should make it sooo much easier next time! 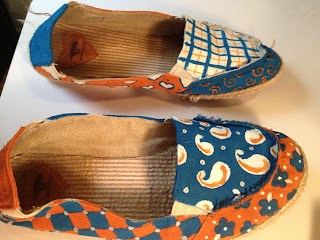 I finally came out with these! 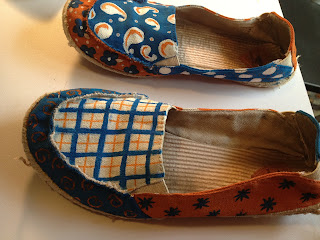 Not too bad for my first attempt :)

Posted by Angela Bullard at 5:46 AM