My to do list only got one item knocked off of it this weekend. The Pervalong quilt top.  I had a couple of problems with this one.  When I went to start working on the borders I could not remember where I had put the part I had already put together.  (As chaotic as my sewing room is I typically know where everything is.)  After searching for about 30 minutes I remembered I had hung it on a nail behind the door to take a picture and never taken it down.  Since I never close the door to that room I completely forgot it was back there.  I also miscalculated my fabric needs on this.  I completely left out one fabric when planning and buying colors, which is why it doesn't go together quite as well as I had pictured in my head.  I had a "light black" left over from another project that I did a long time ago so I threw it into the mix.  Then when I got to block 14 of 20 on the outer border I ran out.  Thankfully I had to run to the store for other things and was thrilled to find that they still had some in stock. 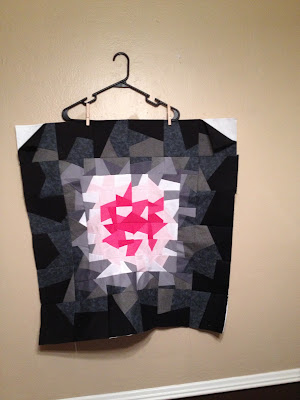 Despite the warnings I managed to put the border on the wrong way (UGH!). There was no way I was going to rip out all of the stitches so I decided I am okay with it the way it is. I haven't removed the paper from the back - which is why it's laying so funny - because I haven't decided what I'm going to do with it yet.  I could add borders and make it into a lap quilt, keep it the size it is and use it as a wall hanging, cover a canvas with it and call it wall art?
The only other thing I worked on this weekend was my Scrappy Stash Quilt. I had been wanting to do this since it started but time got away from me and on Friday I realized the deadline is Tuesday and I hadn't even started on it yet!!!  I make lots of small items for my Etsy shop and Crafted so I don't have a lot of scraps around but I did have a bunch of 1/4 yard and 1/8 yard cuts in various blacks from another project that I never got around to doing.
The rules only require 30 blocks so that was my original goal. I whipped up 30 monochromatic black blocks but after laying them out I decided that 1) it wasn't big enough and 2) it needed some color.
I had a few yellows but not the variety that I wanted.  A not so quick trip to JoAnn's Saturday morning solved that problem. I also picked up the fabrics that I will use for the Curve It Up QAL. So much for my fabric buying ban. Since the fabrics are for a specific project it doesn't count, right? 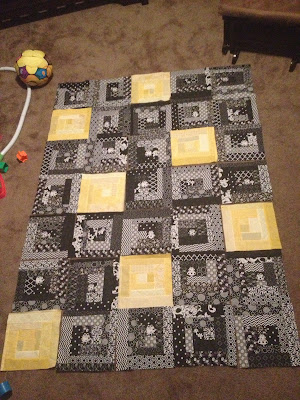 After putting together my yellow blocks and deciding on a layout I felt it was still too small and missing something.  After another, much quicker trip to JoAnn's for grays I ended up with this. 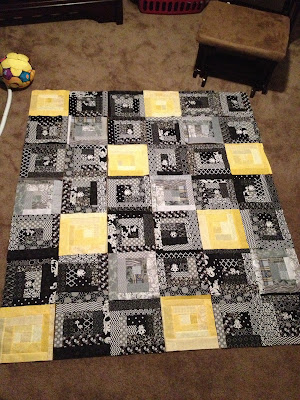 The gray blocks don't stand out as much as I had hoped but I'm pleased with the overall color scheme and layout. 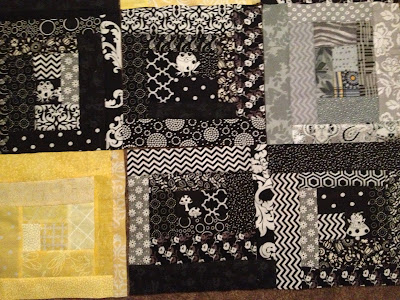 For a little touch of whimsy I fussy cut the center blocks of all of the black blocks to make sure they had a frog or toadstool.
Now I just need to get home and start quilting my squares.  I've decided to try Maureen McCracknell's tutorial for quilting as you go.  Since my machine is definitely not quilting friendly I think it may be a lot easier and produce better results.  Then comes the hard part.  What to do for the back and binding...
For the back I was thinking of doing three log cabin blocks in various sizes (one small, one medium, one large) and color combos on a solid black background.  As for the binding I'm stuck.  Should I use a solid black?  A yellow or gray print?  A print that has all three colors?  Since I have a very limited amount of time to finish it I will be machine stitching the binding on (eek!).  I bought quilters tape to use as a guide so hopefully it will go smoothly. 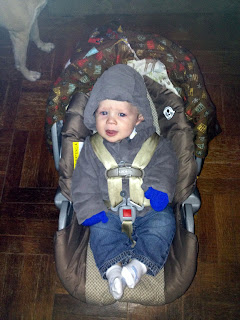 It's Squeak's first winter so we bundled up to go eat last night.  Isn't he cute in his little coat and mittens?! :)
I will be linking up to Fabric Tuesday at Quilt Story for the first time :).
Posted by Angela Bullard at 7:37 AM