WIP of the Week

Earlier this month when listing what I hoped to accomplish, I threw in my long neglected Pervalong top.  Monday night I actually dragged it out and started working on it.  I will admit that more than once I almost threw it away.  I like the design (even though I put my borders on the wrong sides) and I like my colors but the fabric I used was cheap and you could tell.  It does not lay flat and the mini was definitely not squared up.  It was so badly warped after I ironed it that there was no way it could be basted without puckering on the front.  I minimized it as much as possible and sat down to quilt.  I have been wanting to try something new but since I wasn't enthusiastic about this project I just didn't have it in me.  I started quilting on the outer edge (black) then realized after a couple of inches that I had white thread in the machine. 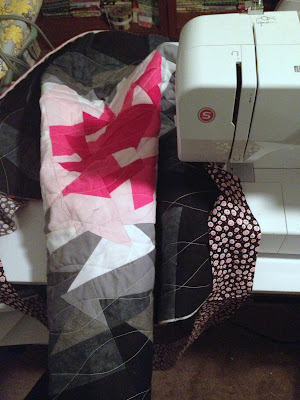 Since I was already at my breaking point I decided to keep going with wavy overlapping lines down the length of the quilt.  The quilting is done -- and is admittedly terrible.  Please remember when looking at it that my priority was to just get it done.  I'm in the process of attaching the binding and will hopefully be able to cross it off of my UFO list tomorrow.

Joining in at WIP Wednesday.
Posted by Angela Bullard at 5:29 AM