I have a bunch of use it or lose it vacation days that I'm trying to take before the end of the year.  Yesterday was one of them.  Do you ever feel like you sew all day and don't have anything to show for it at the end?  That's how I feel about yesterday.
I already had the pieces cut for my next How Far Will You Go Quilt so I just had to put them together. 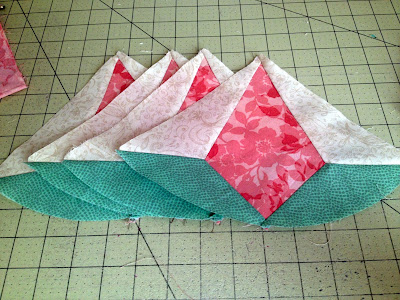 My first attempt at y-seams.  Not too bad!  I definitely thought they would be worse. 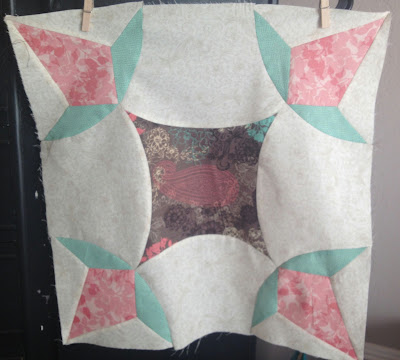 And my first attempt at curves.  Again, not too terrible.  the point where the two pieces meet up on the bottom left is a little off but I'm leaving it.
I did spend quite a bit of time working on the custom diaper bag I'm making.  I finished quilting the front, got all of the pieces cut (except for the handles) and started attaching the pockets to the lining.  Now I'm to the easy part--construction.  I'm hoping that the quilting will make it sturdy enough that I do not have to use pellon as a stabilizer, making it so much easier to sew.  In fact, I may add a bit of quilting to the back, sides, and bottom now that I think about it.  Right now I have just quilted the front panel and side pockets.  I originally pieced together the front and back panels but decided to leave the back a solid so that the work on the front really stands out. 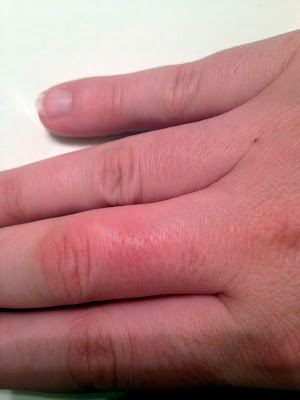 The one thing I do have to show from yesterday is a pretty, shiny burn on my middle finger (appropriate in a way).  It doesn't look like much, but it hurt like %*&#!
Remember those booties I made for Baby T?  The ones that I hated (not the booties themselves, but the making of them)?  Well turns out Baby T's mother AND father loved them.  And they want a few more pair.  And I have trouble saying no when people ask me for things always feel so guilty for saying no that I end up doing what they ask in the end.  Sooo, I'm going to wait a couple of weeks to build up my resolve then try another pair and see how it goes. 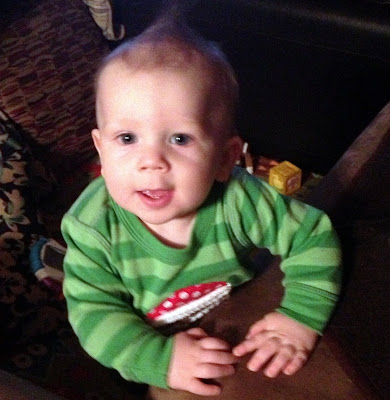 This little boy usually puts up one heck of a fight when its time to sleep.  It doesn't matter if it is a nap or bedtime.  He literally fights--pulls hair, hits, kicks, screams.  BUT last night, despite the fact that he was exhausted, he was in a great mood and we had a wonderful time!
My cousin has agreed to watch him on Saturday so that I can get some work done (thank you, thank you, thank you) so hopefully I'll have more to show on Sunday :)

Posted by Angela Bullard at 5:43 AM